Linguistic Olympics – these students were supposed to represent Germany in the international contest!

The four best of the finals of the Germany-wide selection contest for the International Linguistic Olympiad are certain now. Congratulations to:

On June 13th-14th, 2020 the 10 best participants of the 2nd selection round were invited to the finals of the national contest. Unfortunately, instead of a planned weekend in Berlin the finals could only take place virtually. But this could not stop the enthusiasm of our young linguists. After an intensive virtual training on Saturday, they faced a further competition round on Sunday. Under video supervision, they had three hours to crack the truly hard problems. The four best all qualified for the German national team and they were actually supposed  to travel to the international contest in Latvia at the end of the month. Unfortunately, this year's International Olympics were cancelled due to the Corona Pandemic and postponed to next year (from July 19 to 23, 2021 at the same location in Ventspils, Latvia).

Congratulations to the winners and a big thank you to the responsible scientists at ZAS Dr. André Meinunger, Dr. Kilu von Prince and Dr. Nathalie Topaj, whose extraordinary commitment makes the annual contests possible despite very limited funds. We would also like to thank the scientists Christian Döhler (ZAS) and Doreen Georgi (University of Potsdam) as well as the two members of the jury of the International Linguistic Olympiad Bruno L'Astorina (Brazil) and Daniel Rucki (Poland), who volunteered to hold classes on the training day. 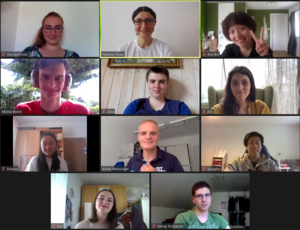 Participants of the finals and the organizers at ZAS meeting virtually