Manfred Krifka visited the President of the Republic, Talis Obed Moses, during his last field work stay in Vanuatu. He already met him in 2008 when he was a pastor in the town of Port Vato on the island of Ambrym. He speaks the language Manfred Krifka is working on - Daakie, one of about 130 languages in the Pacific island state. The president thanked for the work, which led to a dictionary and several books in the language. Thanks to the spelling developed by Krifka, Daakie can now be used as an input language for the local school. 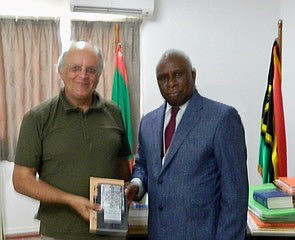