Press release: "Seeing and hearing in conjunction - what Bouba and Kiki reveal about language evolution"

It is a classic experiment in Gestalt psychology: we perceive similarities between the phonetic shape of words and the geometric shape of figures. But is this true only for English and other Indo-European languages? An international team of researchers led by the Leibniz-Zentrum Allgemeine Sprachwissenschaft (ZAS) Berlin has investigated the phenomenon across 25 languages worldwide and found: The bouba/kiki effect is widespread. And it could shed light on an essential aspect of the origin of human language.

When people are presented with a round and an angular shape and asked which one is “bouba”, most of them indicate the round shape, while for “kiki”, they point to the angular one. Wolfgang Köhler first described the phenomenon in his classic 1929 work on Gestalt psychology (originally using the words “baluba” and “takete”). Since then, the bouba/kiki effect has been the subject of numerous psychological studies trying to understand how and why people recognize correspondences between different perceptual modalities.

Though, is this just a peculiarity of English or other Indo-European languages? Perhaps we think of “bouba” as “balloon”, or see the roundness in the letters “B” and “O”. In fact, a substantial amount of research on the bouba/kiki effect has been conducted with speakers of Indo-European languages, who write using the Roman alphabet.

However, the bouba/kiki effect could also go back to the origins of spoken language. Perhaps the similarities of the phonetic expression and meaning were bases for our ancestors to refer to things in the world. Such similarities may also have been used to develop new words in modified form, as they could then be understood with greater certainty. Crucial to evaluating this hypothesis is how widespread the effect is. It could, after all, just be a deeply rooted characteristic of a particular language to combine a specific sound with a specific shape.

To find out, 22 researchers from 12 countries, with Aleksandra Ćwiek of the Leibniz-Zentrum Allgemeine Sprachwissenschaft (ZAS) as the first author, conducted a test with native speakers of 25 languages representing nine language families and ten different writing systems, including, among others Hungarian, Japanese, Farsi, Georgian, and Zulu. The results showed that most speakers, regardless of language and writing system, associated “bouba” with the round shape and “kiki” with the spiky shape.

Susanne Fuchs, co-author and head of the “Laboratory Phonology” research area at ZAS, commented: “On the one hand, I had expected the shapes of letters and characters in the different writing systems to show a greater effect. On the other hand, writing emerged much later than spoken language. That the bouba/kiki effect still persists even when writing is taken into account speaks to its robustness and possible role in language evolution.”

There were exceptions, however. For example, native speakers of Romanian, Turkish, and Mandarin Chinese showed an opposite preference. It remains to be determined what might have overridden the effect. One possibility is that these languages contain actual words similar to “bouba” and “kiki”, which meanings evoke a different association. However, looking at the results as a whole, these cases seem to be rather exceptions that confirm the general tendency.

In any case, the results provide the most robust evidence yet that sound-meaning correspondence in the bouba/kiki effect is stable across cultures and writing systems. The study, thus, also supports the possibility that our ancestors may have used correspondences between speech sounds and visual properties to form some of the first words. Aleksandra Ćwiek commented: “This prevalent relationship between sound and shape only lets me wonder how many different other relationships on various modalities might have shaped our language at its dawn.” Today, many thousands of years later, the perceived roundness of the English word “balloon” may not be a coincidence after all. 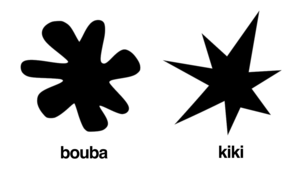