Prof. Dr. Dr. h.c. Artemis Alexiadou will take over as director of the Leibniz Center for General Linguistics (ZAS) in Berlin as of October 1st, 2022. The leadership position is combined with a joint appointment to the S-Professorship for "General Linguistics" at the Humboldt-Universität zu Berlin. The internationally renowned linguist succeeds ththe now retiring Prof. Dr. Manfred Krifka, who has headed ZAS Berlin for 22 years.

Artemis Alexiadou is one of the most important representatives of generative linguistics in Europe. She conducts research in particular on the theory of syntax and morphology, on cross-linguistic variation and on so-called heritage languages.

Manfred Krifka says: "Artemis Alexiadou was already associated with the predecessor of the Leibniz Centre General Linguistics during her doctoral studies, and, after returning from Stuttgart, she has contributed significantly to the success of the institute in recent years as Vice Director and head of a research area. I am convinced that she has the flair to foster individual research interests and to bundle them into successful and relevant research projects, as well as the talent to steer the Institute in a complex scientific, social and political environment. I wish her the best of luck and the support of all staff, as I was privileged to experience myself."

Her outstanding research has been recognized several times with grants and awards, including the DFG's highly endowed Gottfried Wilhelm Leibniz Prize in 2014. She is a member of the Leopoldina and Academia Europea. In 2016, she was awarded an honorary doctorate by the Norwegian University of Science and Technology.

Artemis Alexiadou succeeds Prof. Dr. Manfred Krifka, who led the center for 22 years, and who is now retiring. Fortunately, Prof. Krifka will remain with the ZAS at least until the end of 2024 as principal investigator of the project “Speech Acts in Grammar and Discourse (SPAGAD)” funded by the European Research Council.

Artemis Alexiadou emphasizes “We are all deeply thankful to Manfred Krifka for his leadership and central role in creating a wonderful research environment at ZAS. He has been instrumental in placing ZAS at the forefront of theoretically driven empirical research with a special attention to small languages, in introducing a broad cross-linguistic perspective on all areas of linguistics, as well as promoting the societal relevance of linguistic research.  I personally want to thank him for his support and his trust during my time as vice director of ZAS. I am proud to be able to follow on his footsteps.” 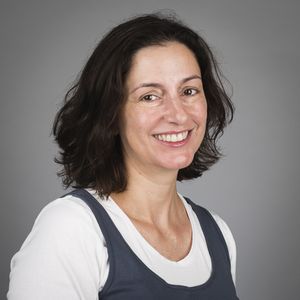