The ZAS Database of Clause-embedding Predicates documents the clausal complementation patterns of a series of lexical predicates in several languages. It is built around a curated collection of corpus examples which illustrate different types of embedding for each predicate and are annotated for a number of grammatical properties. This makes it possible to run powerful queries on the database to obtain examples or predicates that meet different criteria. The contemporary German portion, along with a custom-built search interface, has now been released as a public beta on the OWIDplus platform, in cooperation with the Institut für Deutsche Sprache. This release contains over 1,700 clause-embedding predicates and nearly 17,000 corpus examples. Future releases will expand coverage to include additional languages and historical stages of German. 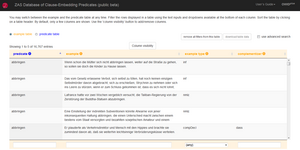